A downloadable game for Windows

This is a submission for the End of Summer game jam for the Vive.

Explorer, you must manipulate the world to save the last of the bovine citizens and relics of this planet such that they go into the heart shaped box surrounded by the moving archways of water, from which a mystical musical landscape emits in a world painted with hearts and rainbows.

To those who explore let me share that in this enchanted world the gravity is substantially less. This planet is in free-fall due to the rule of the owner of this world, Mitten's the cat careless ways. In sorrow, Mitten keeps his stay over a magical watery pond protected by the paws of wisdom. He watches over and ensures the bovine citizens leave his planet safely before it ends.

Yes, I waited until the last minute to do this. In my defense, the state fair was in town and I was ... shall we say... recovering... from a late night series of adventures with friends and the carnival. Then, well, I wanted to get a fairly large update for Coinvault for Thursday and that took my available time. Since, you know, life stuff. I decided that rather than missing the game jam, I would simply work into the wee hours doing whatever it took to get something, anything for the game jam. And then Raw Data dropped a large content update and I played that for a while. THEN-THEN, after playing Raw Data for a while, I realized I needed to get started.

What resulted from this is the game described accurately by the short story above. VR is amazing this way. You can come up with the most insane of story propositions and... it just ... well, I'd say "works", but I'll let you judge that.

I'm as surprised as you that this title under went any playtesting, but it did. I realized the title was feature complete when the wall and ceiling were damaged by my testers. Immersive enough to hit a wall or ceiling? Good enough for me! 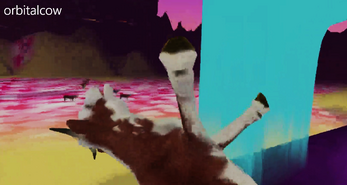